Take the Narco Road to Perquín 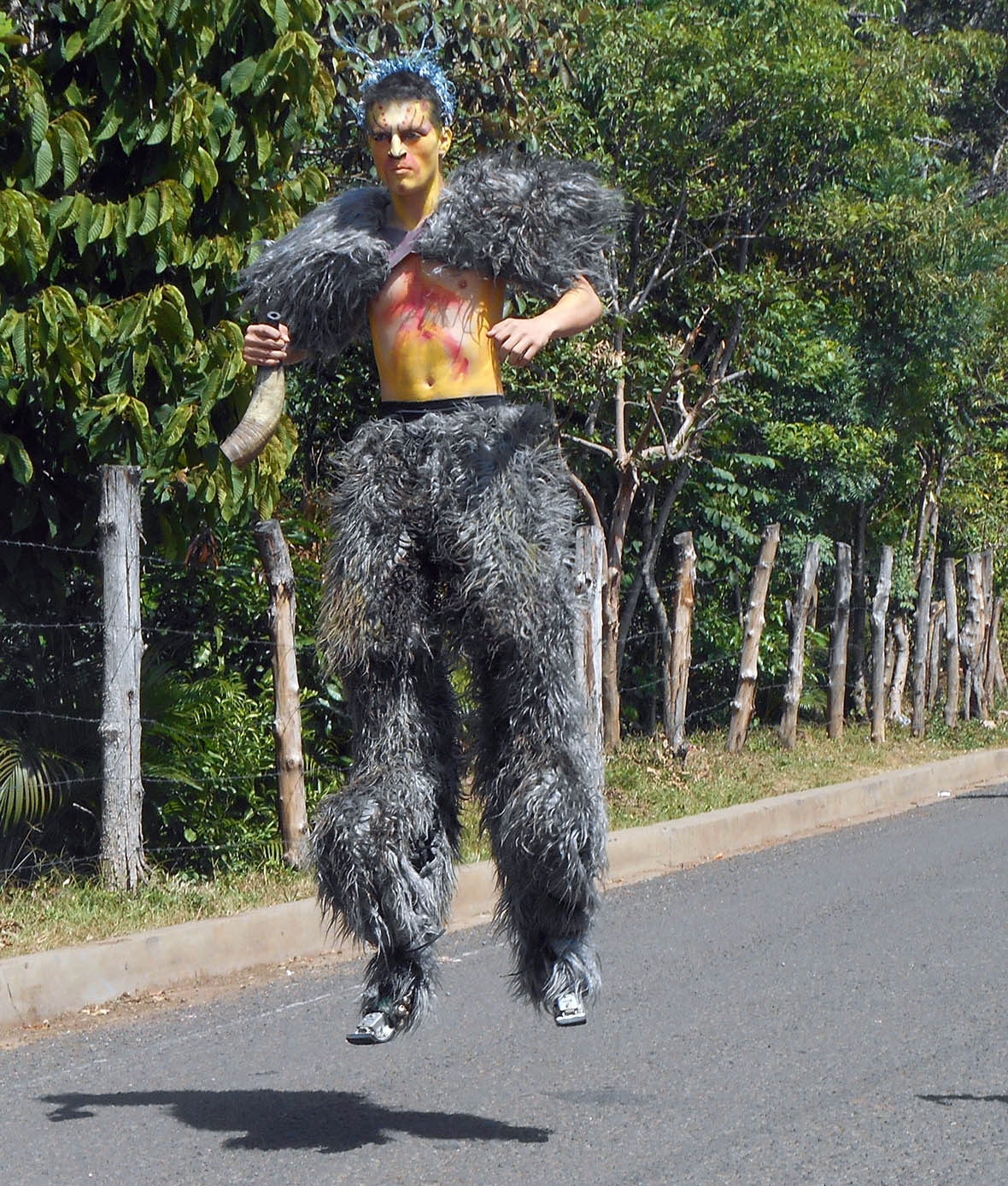 In El Salvador, August falls in "winter," the rainy season when life-giving corn crops are celebrated -- most notably in Perquín. The rural road leading to the tiny town by the Honduran border is lined by modest dwellings that are jarred by uprisings of “remesas homes.” Named after the money that flows in from Salvadorans working in the U.S., what these top-heavy mini-mansions lack in architectural style they make up for with blocky volume. Massive walls and towering gates are spiraled with razor wire to envelop the owner-designed monoliths, rich with unnecessary tile work, tinted-window overload and incongruous ironwork ornamentation. These eyesores are not to be confused with the neighboring castles that are constructed by narcos. The latter compounds, financed by drug money, mix Spanish and Persian styles in the gaudiest ways possible, fronted by Romanesque columns and accented with statues of power-pride animals like fierce lions and formidable canines. 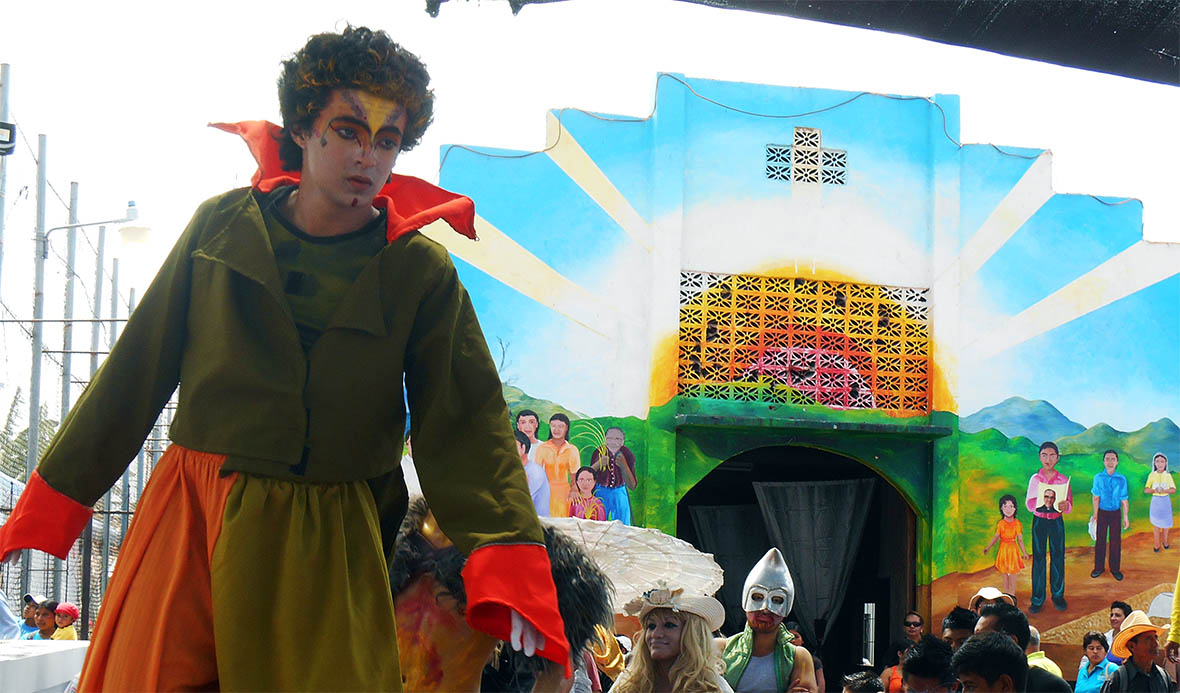 But Perquín bears little resemblance to the cash-flashing neighbors on its hilly outskirts, which are flush with coffee plantations, pine-dotted slopes and rugged rock formations. Perquin's steep, winding streets give a sense of European strolling as one wanders a good selection of second-hand clothing stores and inviting eateries (locals crowd into Perka Linda for its hen soup). The picturesque village was a stronghold of guerrilla resistance during the long civil war, in an area that saw casualties in the tens of thousands. Today, it enjoys a level of tranquility not easily found in the crowded and often chaotic country.

Reflections. Perquin's multi-day winter festival began with a parade, assembled in a field on the edge of town. The reigning Lenka Queen, dressed in indigenous finery and clutching a small crown, lead the procession. She was flanked by young women in similar dress who were in contention for the title. Local dignitaries, including former guerillas who have become community leaders, followed, just ahead of the performers. The first half of the costumed paraders donned native wear specific to the region, with jutting headdresses of color-streaked plumage and a multitude of monster masks to represent the demons of days gone by. A band strummed guitars and sang out traditional tunes. More professional paraders brought up the rear, including a team of stilt walkers from the capital of San Salvador, a papier-mâché giant, and a troupe of men in bawdy drag. Fireworks launched from long bamboo sticks prompted the pack up the main road and into town. 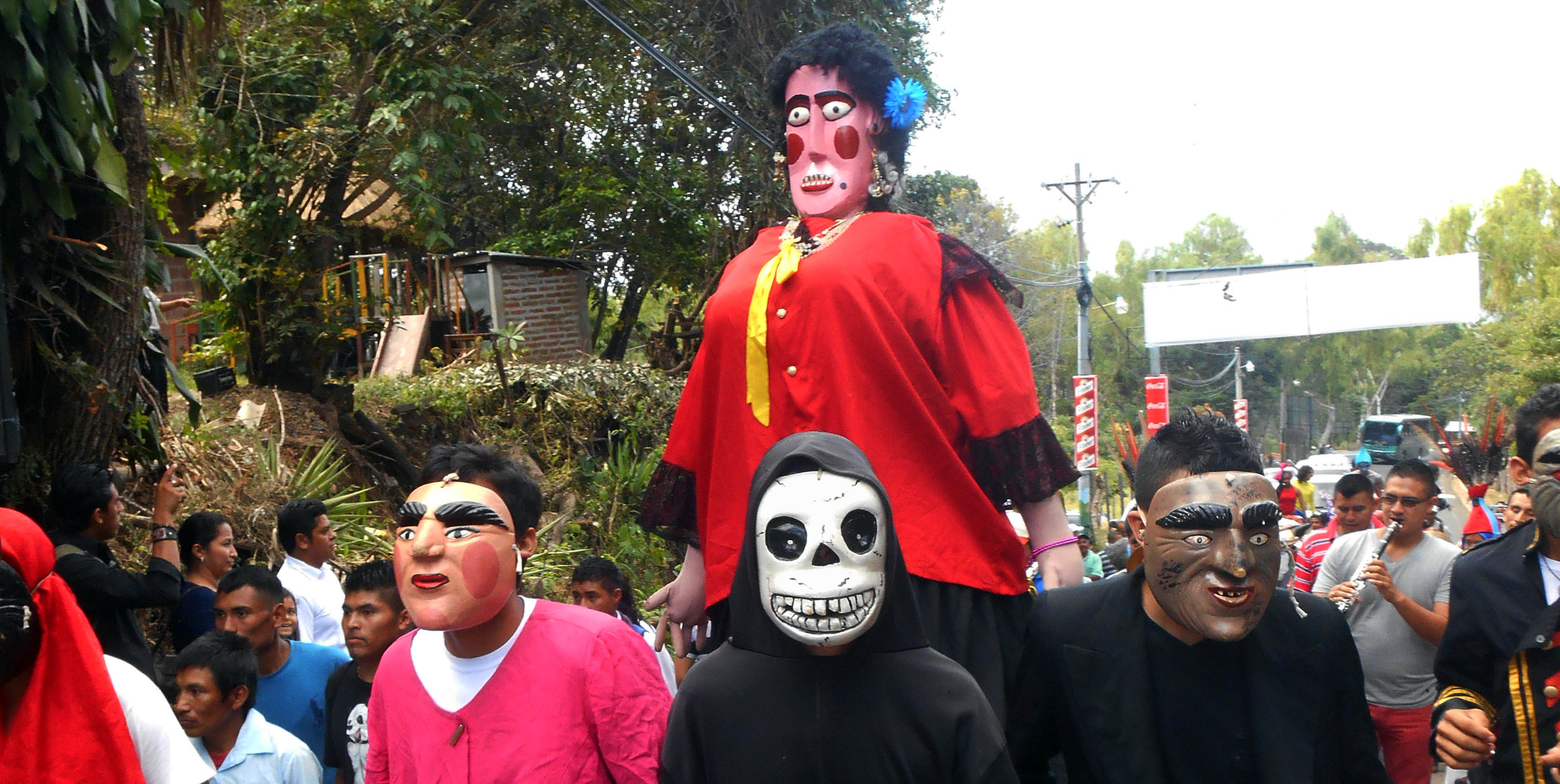 A canopy of shade was formed by the tarps of vendors hawking hot food, clothing and artisan works along the route into the central plaza, where a small mural-fronted church serves as a colorful backdrop. The commencement from an amphitheater stage included incantations to the forces of nature from a gringo priest. It was revealed that Jesus, affectionately dubbed “Colochito” for his wavy hair, had closed the tap for the rain -- an attempt to add some levity to a somewhat dire situation. This annual festival that celebrates the rain was taking place in the middle of a drought that had nearly destroyed the livelihood of local corn farmers. Patches of bone-dry cornfields along the road into town served as a sober reminder. 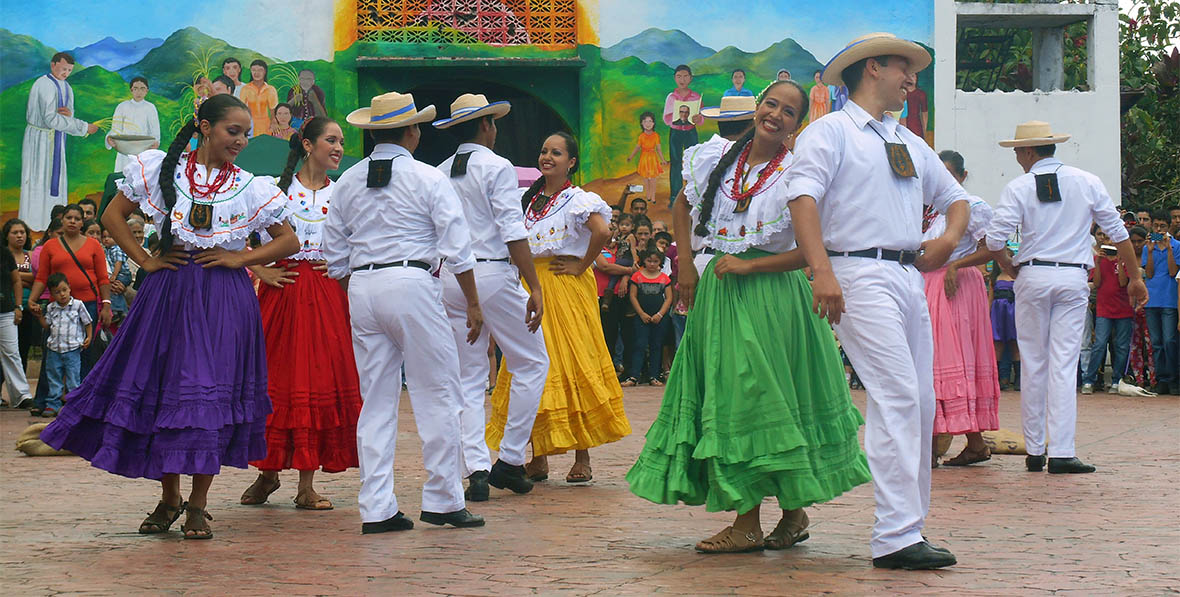 The gathering's first official dance was an homage to the indigenous, with performers in feather headdresses and simple white clothing with colored silk wraps. The natives were soon circled by invading Spaniards, conquistadors represented by a motley group in ugly masks, toting the cow they introduced to the land. Mock bullfighting followed, with the feisty beast representing rebellion against the invaders. Another dance routine saw the Spanish settlers trading mirrors for gold. Live music that followed was coordinated by Sebastián Torogoz, a surviving member of the guerrilla group Los Torogoces de Morazán, who is still out performing the songs that inspired his fellow fighters during the war. A group of kids captivated the audience, five niños barely big enough to hold their guitars belting out pueblo tunes.

As the music played, the sunny day was suddenly consumed by dark clouds. The rain came pouring. A few drops gave little notice of the torrential downpour that collapsed the wide shade covering onto the audience. Hail smacked the ground as revelers ran for cover, which was barely found under vendor tarps that sagged with the weight of rapidly pooling water. The big day appeared all but ruined, but the crowd's spirits actually got more gleeful. The prayer for rain that opened the festival had been answered. Vendors who would see a dent in business over the deluge greeted the merciless rain with wide smiles. Young men laughed as they shivered in the cold, wringing out soaked t-shirts. Everyone was uncomfortably cold and somewhat soppy, but there was still not a frown to be found. Then the rain departed as quickly as it had arrived. The band was back on the stage and the days of celebration in the tiny iconic town played on.